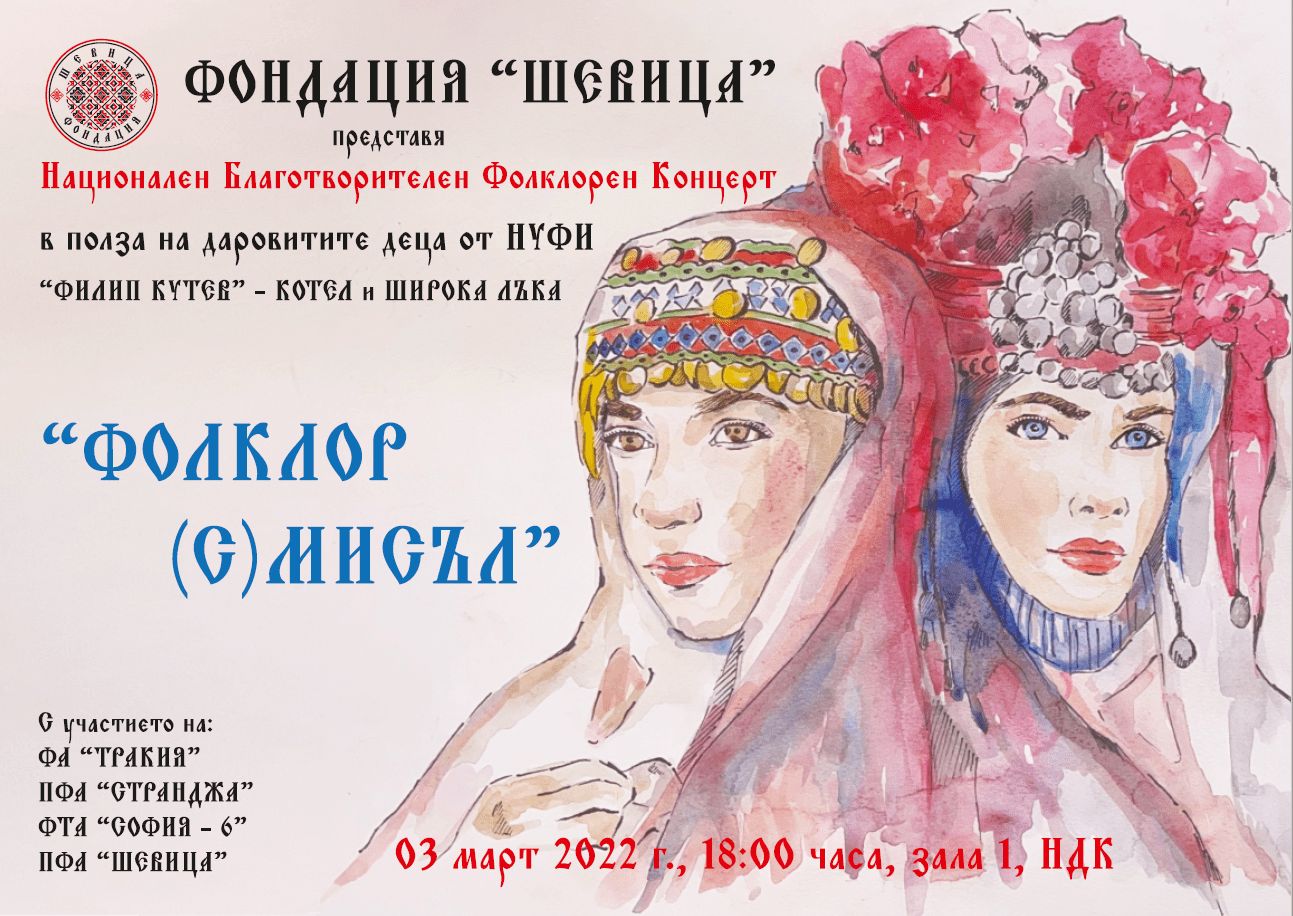 RAISES FUNDS FOR GIFTED STUDENTS FROM KOTEL AND SHIROKQ LUKA

The Bulgarian folk ensembles “Trakia”, “Strandja”, “Sofia-6” and “Shevitsa” unite in an iconic folklore concert for charity. On March 3, in Hall 1 of the National Palace of Culture, the four ensembles will launch the establishment of scholarships for gifted students from the National Schools of Folk Arts.

The idea for the event came about jointly between the founder and inspirer of the Shevitsa Foundation – Peter Angelov and Maria and Dobrin Balchevi.

“Since the establishment of the Foundation and the ensemble, we have held a number of charity concerts with the solgan “A sparkle of light together with Shevitsa”. For the fifth anniversary of our foundation we decided to organize and hold a “National Charity Folklore Concert” with the title “FOLKLOR (WITH) THOUGHT”, in support of the young talents of Bulgarian folklore. To our greatest pleasure, this initiative was taken to heart by the ensembles “Trakia”, “Strandja” and “Sofia-6” – says excited founder of the Representative Folklore Ensemble “Shevitsa” – Peter Angelov.

“Educating children in our traditions and customs, preserving our national identity, encouraging talented and bright children and sowing in their hearts and souls the seeds of love and kindness are goals that we consider particularly important for us. And because we have always believed that a person is only as big as his dreams, we have joined with the Shevitsa Foundation as partners in this great initiative,” say Maria and Dobrin Balchev.

“We are extremely happy that this is not the first time we are involved in such wonderful initiatives and we believe that through the magic of dance we will be able to collect enough money and start a new folklore challenge. We will wait for you there” – says the artistic director of the ensemble “Sofia – 6” Nikolay Nestorov.

“Thinking about the children of Bulgaria gives us hope to move forward…” is the slogan of the charity event. The organizers are convinced that this concert will be remembered for a long time – not only because of the colorfulness and diversity of the ethnographic areas that will be presented, but especially because of the meaningful work that it brings.

This website uses cookies to improve your experience while you navigate through the website. Out of these, the cookies that are categorized as necessary are stored on your browser as they are essential for the working of basic functionalities of the website. We also use third-party cookies that help us analyze and understand how you use this website. These cookies will be stored in your browser only with your consent. You also have the option to opt-out of these cookies. But opting out of some of these cookies may affect your browsing experience.
SAVE & ACCEPT